The 2013-2014 Crowley project investigated human rights violations against the LGBT community in Bangladesh, with a particular focus on the barriers preventing community members from accessing meaningful remedies after their rights are violated. Despite national and international legal protections providing for non-discrimination and access to justice, in practice, gender and sexual minorities face many obstacles, and have little recourse for rights abuses. The perpetrators of these abuses, including government officials, routinely go unpunished. Poor rule of law, social stigma, poverty, and lack of rights awareness contribute to and exacerbate this problem. 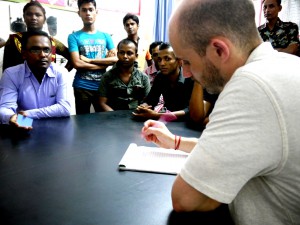 The delegation conducted wide-ranging interviews with stakeholders and experts in the country, including members of NGOs, the government and its partners, academia, legal and advocacy communities, and local leadership, whose expertise will inform a broader understanding of the issues. Following the completion of the fieldwork, the Crowley Team will publish and disseminate a report of its findings, which will also be published as a scholarly article, and conduct follow-up advocacy.