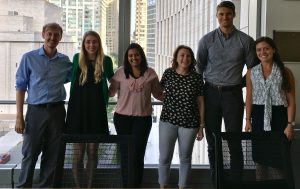 The Leitner Center for International Law and Justice is proud to announce the 2017 Crowley Scholars, marking the 20th class of Fordham Law students to engage in rigorous, hands-on training in international human rights advocacy since the Crowley Program in International Human Rights was first established in 1997. This year, a team of seven Crowley Scholars will engage in advocacy and capacity-building projects to empower underserved, marginalized communities in East and Southeast Asia, working hand-in-hand with in-country rights defenders at the frontlines of grassroots advocacy. In particular, the Crowley Scholars will partner with ethnic and religious minority activists in Burma, with special attention to empowerment of women and girls and advocacy to end forced assimilation, as well as activists in China working to advance the right to health for marginalized communities.

Nickolas Ask graduated from the City University of New York – Hunter College with a B.A. in Political Science and Human Rights. After receiving his degree, Nickolas worked at the Permanent Mission of Norway to the United Nations as an Assistant Attaché on Gender Issues and as a Press Attaché. Before law school, he was a junior consultant at the Norwegian communications firm Geelmuyden Kiese in Brussels, focusing on European Union policies. This past summer, Nickolas interned at the United Nations Security Council Sanctions Committee on ISIL and Al-Qaeda as a 2017 Leitner Summer Fellow. At Fordham Law, Nickolas is a staff member of the International Law Journal and a member of the school’s International Refugee Assistance Project chapter.

Caitlin Hickey graduated from New York University in 2016 with a dual B.A. in Comparative Literature and Psychology, and a minor in French Studies. Her concentration was in Women’s Studies and French Feminist Theory, which she completed during a semester in Paris. While at NYU, Caitlin worked for an immigration law firm. This past summer, she interned at the Legal Aid Society in the Prisoners’ Rights Project advocating for people in New York state custody. At Fordham Law, Caitlin is on the boards of If/When/How: Lawyering for Reproductive Justice, Advocates for the Incarcerated, and the Fordham Student Sponsored Fellowship, and is a staff member of the Environmental Law Journal.

Traci Krasne graduated from Washington University in St. Louis in 2013, where she earned a BA in International Studies, with a minor in Psychology. Since graduation, she has worked in various roles at non-profit organizations throughout New York City, including at the Center for Constitutional Rights and at LawHelpNY. She spent one year at the Policing Project, conducting research to analyze the efficacy and cost-effectiveness of police practices. At Fordham Law, she is on the board of the Anti-Trafficking Legal Advocacy Society. She is also a member of Universal Justice and the Urban Law Journal.

Robyn Luzon graduated from Hofstra University in 2016 with a B.A. in History with a minor in Spanish. Within her history major she focused on genocide studies and wrote her honors thesis on grassroots political activism. As president of Phi Alpha Delta, Robyn organized various philanthropic events and worked with the Innocence Project to raise awareness on wrongful convictions and issues in the justice system. During her undergraduate studies, she interned with a federal judge in the Eastern District of New York. At Fordham Law, Robyn is on the International Law Journal and spent this summer abroad with the Ireland Program, where she interned with the Irish Refugee Council.

Michael Mazzullo graduated from Columbia University in 2012 with a B.A. in History. Soon after graduating, Michael returned to his former high school to teach Social Studies, coach soccer, and engage students around issues of social justice. He earned an M.A. in History in 2015 as a part-time student. Michael is entering his fifth year teaching and attends Fordham Law as an evening student. In two of his summers off from teaching, Michael volunteered with the organization Coaches Across Continents and helped run programs in South Africa, Malawi, Cameroon, and the Democratic Republic of the Congo. The NGO partners with local organizations to address social issues such as gender inequality, HIV education, and conflict resolution. This past summer, Michael interned at the General Counsel’s Office in the U.S. Agency for International Development (USAID) as a 2017 Leitner Summer Fellow.

Krina Patel graduated from Seton Hall University with a B.A. in Political Science and Philosophy. While in college, Krina worked at a law firm in New Jersey primarily assisting local community members lower their property taxes. She also worked with an Indian dance academy as a dancer, dance teacher, and event manager. This past summer, she took an International Human Rights course as part of Fordham’s Ireland Program and interned with the Four Courts in Dublin. At Fordham Law, she is a student adviser to incoming 1L and LLM students. She is also on the International Law Journal and will be a student in the Walter Leitner International Human Rights Clinic.

Reece Pelley graduated from Clemson University in 2014 with a B.A. in Political Science and a minor in History. Prior to attending Fordham Law, Reece worked for U.S. Senator Lindsey Graham as his appropriations and projects aide. In this capacity, Reece worked directly on the Senator’s appropriations portfolio with a specific focus on his work related to his chairmanship of the State and Foreign Operations and Related Programs subcommittee and his membership of the subcommittee on Defense. This past summer, Reece interned at the Open Society Justice Initiative where he worked with both the International Justice and Freedom of Information and Expression teams. At Fordham Law, Reece is a member of the Fordham Moot Court Board.