The 2016-2017 Crowley project investigated land tenure security and traditional governance in rural South Africa, with a focus on land dispossession of poor black communities. As a result of colonial and apartheid laws and policies, the land rights of communities living on communal or traditional land are not recorded and legally insecure. These communities remain vulnerable to having their land taken with no consultation or compensation when questions of development and land use arise. Communities living on resource rich land, including minerals and petroleum, crushed stone, sand, or suitable for agriculture, are particularly vulnerable to land dispossession as a consequence of the current legal framework that does not adequately recognize or protect their rights to land. There are policies, laws, and drafts laws in place that undermine or disregard the land rights of these communities, and prioritize development and land uses that result in the dispossession of the land of black communities across South Africa.

For two weeks in May 2017, a delegation from Fordham Law School, consisting of Crowley Fellow Zenande Booi, Fordham Law Professor Jeanmarie Fenrich, and six Leitner students traveled to South Africa to participate in a fieldwork documentation project to research how issues of land rights and traditional governance manifest in rural communities in South Africa, including in affected communities in the Eastern Cape, KwaZulu-Natal, Gauteng, and the Western Cape. The students who participated in this fact-finding trip include Crowley Scholars Shirin Dhanani, Olivia Scandura, Christopher Ziemba, Isedua Oribhabor, Gabriel Lombardia Gonzalez, and Elizabeth Snyder. 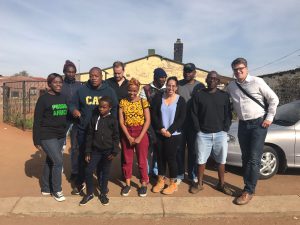 The delegation conducted interviews with community members and activists, representatives from community based organizations and NGOs, members of parliament, government officials, traditional authorities, and academics whose expertise contextualized and informed deeper understandings of the issues.