The Leitner Center awarded its first annual Human Rights Prize to the Coalition of Women Living with HIV/AIDS in Malawi (COWLHA) in September 2007. Daphne Gondwe, President of COWLHA, accepted the award on behalf of the organization. 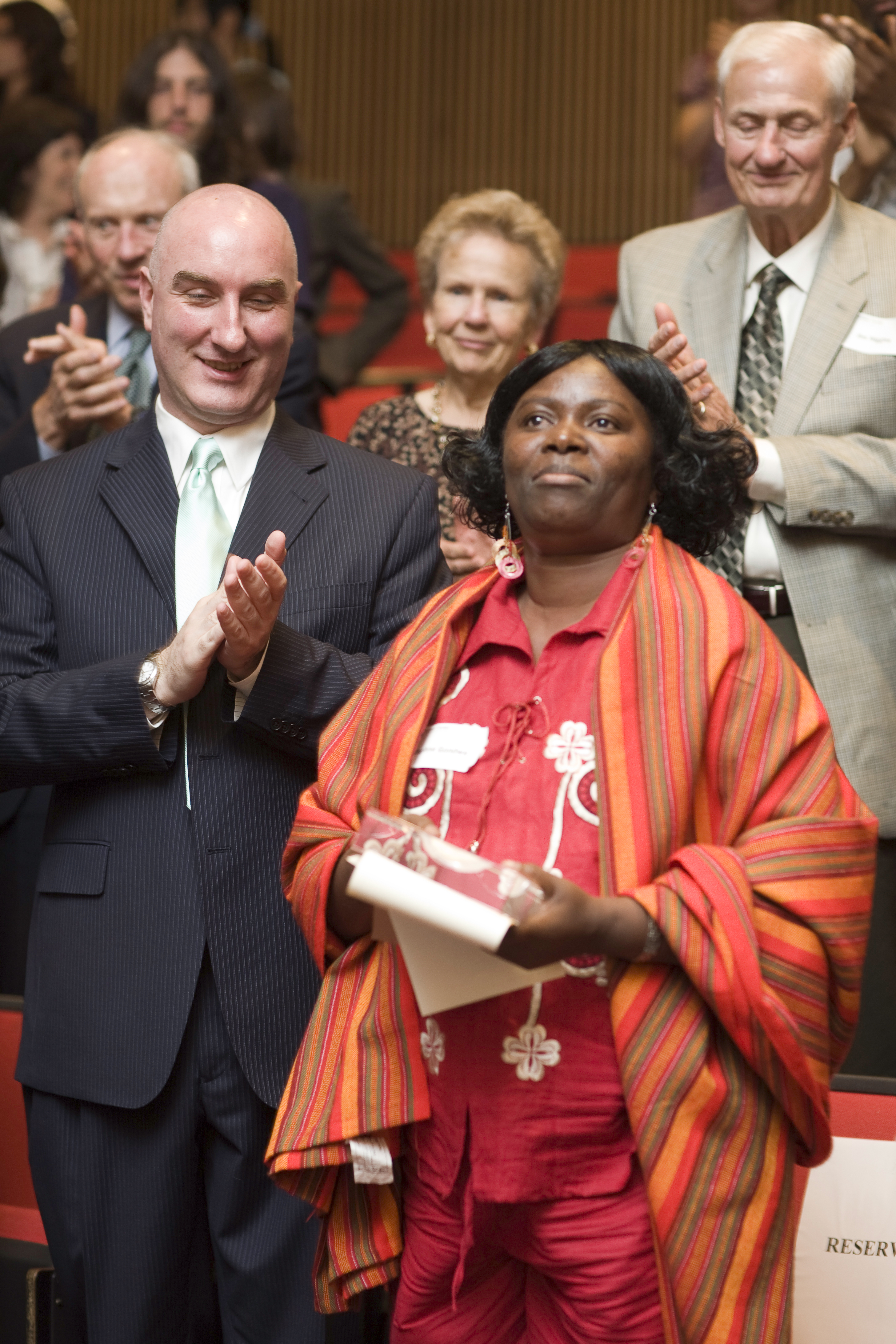 Daphne Gondwe, of the Coalition of Women Living with HIV/AIDS in Malawi

The Coalition of Women Living with HIV/AIDS (COWLHA) is the first and only organization in Malawi whose leadership and membership are HIV-positive women and girls working to promote and defend their rights. From its initial membership of just 56 HIV-positive women in 2006, the organization now boasts more than 50,000 members who have come out in the open about their HIV-positive status. These women are in a better position to gain access to HIV testing and counseling, anti-retroviral clinics, prevention of mother-to-child transmission (PMTCT) clinics, and nutritional support.

I have met many remarkable people in my life: presidents, kings,  diplomats. One of the most memorable of these encounters – and certainly  most moving – came a bit more than a year ago, when I met a group of  HIV-positive staff members at the United Nations.

For me, it was a moment of epiphany. I was struck by their courage and,  more, by their directness in talking about their lives. Suddenly, I saw  the human face of HIV. It made me wonder: What could I do differently,  how could I help?

It was impossible not to be reminded of the discrimination those with  HIV often face in many parts of the world, including Asia. Against this  backdrop, I was so proud of my U.N. colleagues – for standing up and  speaking out, for challenging stigma and discrimination and for helping  make the U.N. a model of how the workplace should respond to AIDS.

This week, more than 20,000 activists, academics and policy-makers gathered in Mexico City for the 17th International AIDS Conference,  heralding what many called a “new era” in fighting the disease. For the  first time fewer people are being infected by HIV and fewer are dying. A recent UNAIDS 2008 Report shows encouraging progress in preventing HIV  in a number of the most vulnerable countries, thanks to changes in  sexual behavior (particularly among young people) and better access to  anti-retroviral drugs.

These gains would not have been possible without strong support from the  international community. In Hokkaido last month, G8 nations renewed  their pledge to work toward the goal of universal access to HIV  treatment by 2010. More recently, President Bush signed legislation  committing $48 billion to the fight against AIDS, tuberculosis and  malaria over the next five years. And yet, we must remember: One of the  biggest hurdles for our global response to AIDS is psychological.

That is the stigma factor. To greater or lesser degrees, almost  everywhere in the world, discrimination remains a fact of daily life for people living with HIV. One-third of all countries have virtually no  laws protecting their rights. Almost all permit at least some form of  discrimination – against women and children who contract the disease,  against gay men, against communities at risk.

Stigma remains the single most important barrier to public action. It is the main reason too many people are afraid to see a doctor to determine whether they have the disease, or to seek treatment if so. It helps make AIDS the silent killer, because people fear the social disgrace of speaking about it, or taking easily available precautions. Stigma is a chief reason the AIDS epidemic continues to devastate societies around  the world.

We can fight stigma. Enlightened laws and policies are key. But it begins with openness, the courage to speak out. Fortunately, more and  more people are finding their voices, like my UN colleagues.

Visiting the AIDS conference, I was greeted with a kiss by a young  activist from Honduras, just 12 years old. Infected since birth, Keren  Gonzalez not only lives with HIV but thrives. She edits a magazine for  children affected by AIDS (funded by UNICEF) and participates in  workshops on AIDS awareness and sensitivity across Latin America. She  knows only too well the pain of stigma. When she entered nursery school,  teachers told her to sit in the corner and not touch other children’s’  books or toys. But with understanding came acceptance. “I’m the most  popular girl in my class,” she says with pride. Her greatest fear isn’t  her condition but how she will be received when she moves on to  secondary school.

At the Global Village, a center for community activism at the  conference, there were others – dancers, civil society leaders, even  hairdressers – living with HIV, richly and happily and openly. Among  them was a woman from Malawi, Daphne Gondwe, who learned she had  the disease in 1999 after her husband grew sick. Fighting discrimination  ever since – one co-worker asked her not to use the dishes in their  shared kitchen – she asked me to use her story to “make change in the  world.” Such people are at the heart of the global campaign against AIDS. It is  impossible not to admire their courage and commitment. Yet their  efforts, alone, are not enough.

In Mexico City, I called on world leaders to join them, to speak out  against discrimination and to guarantee the rights of people living with  HIV. Schools should teach respect and understanding. Religious leaders  should preach tolerance. The media should condemn prejudice and use its  influence to advance social change, from securing legal protections to  ensuring access to health care.

Above all, we must recognize that those who bear the stigma of HIV  should not be those who live with the disease. It is those who allow it.

Ban Ki-moon is secretary-general of the United Nations.