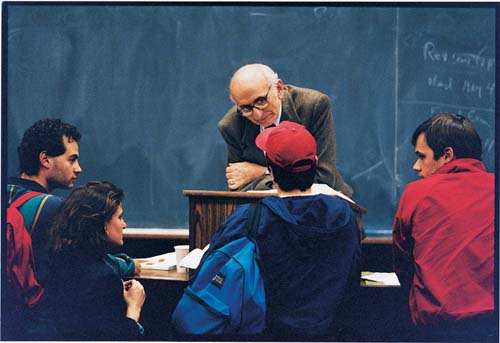 Louis Henkin influenced – and will continue to influence – countless lives in untold ways.  Not least, in fact perhaps most, are those persons throughout the world and in the United States who benefit from the prospect of their fundamental rights receiving a measure of recognition.  Of course most of these persons will never know of Lou or their debt to him.  I consider myself infinitely graced to be in the still considerable number of people who did know Lou directly.  My debt is that much greater.

My association with Lou did not begin the way so many others did, as a student or colleague or human rights advocate.  I frankly had never heard of him until I became of freshman counselor for a group that included his son, David.  Back then I was a graduate student with the goal of teaching colonial history.  The Henkins did not shift my goal to the law.  (In fact David, perhaps because the law held no mysteries, has since become a leading historian at Berkeley.)  But when my goals did shift, the path became clear.  David, brilliant yet always playful, was a good advertisement for his father.  Lou was a stellar poster prof for Columbia.  So, having applied nowhere else, it was off to Morningside Heights I went.

I was immediately disappointed, though certainly not by Lou.  To the contrary, he invited me to his office the first week and listened to whatever half-considered career plans I had.  His advice to me about first-year, delivered with a twinkle, was, “Do well!”  Instead what disappointed me was I did not get assigned Lou for Constitutional Law.  My solution was simply to audit his classes.  The experience was breathtaking.  He seemed to cover five cases to every one in any of my other classes.  Yet he didn’t skimp on critique or analysis, though he briskly made it clear why in his view a given decision made sense or did not.  I thought I had the best of both worlds: an encyclopedic survey without Socratic examination.  Then one day he called on me in passing.  I’m not sure whether I “did well.”  But I made sure that I never treated his course as a simple audit again, which I’m pretty sure was the real point of his query.

But the truly life-changing experience was Lou teaching international human rights.  This education was in truth a family affair.  It was Alice Henkin who, along with Jack and Deborah Greenberg, was running one of the country’s first programs giving law students a chance to serve as interns with NGOs around the world.  As a result I was able to work for a summer in Belfast with a leading group, while the “Troubles” made the city a grim primer for both human rights violations and advocacy.  After that, there was no turning back.  Fortunately, the first place to turn to was Lou’s classes.  As with Con Law, these were encyclopedic and rigorous.  But they also had a measure of passion that went beyond what I’d experienced before.  Though ever scholarly and avuncular, Lou also imparted a deep and ardent sense of rage at injustice, and empathy for its victims.

That example remains indelible.  Rarely, if ever, have I encountered the combination of intellectual rigor with an urgency to change the world for the better.  Yet with all that, he somehow avoided the trap of zealotry.  My first encounter of him was as a family man, and that will always be my primary image.  Over the years we’d always first talk about how things were going in his family and in mine.  In fact I’ve rarely seen parents more proud than when David gave a reading for one of his newly-published books at the Columbia Bookstore.  He was also unfailingly kind to his extended family of hundreds of former students and colleagues.  Lou was always there for further teaching on points of law, advice on how to set up a human rights program, or simply general counseling.  And, until the last few years, his energy was prodigious.  The writing and teaching speaks for itself.  But, more concretely, I remember, even after I graduated, meeting him at his office, and then him bounding down eight flights of stairs before we hit the street level for lunch.

I’ll miss those lunches, the phone conversations, the meetings at conferences, lectures, and human rights sessions.  I am and will be forever grateful, though, for Lou Henkin’s scholarship, teaching, advice, and most of all, the inspiration.  That is one toast that can be made around the world.