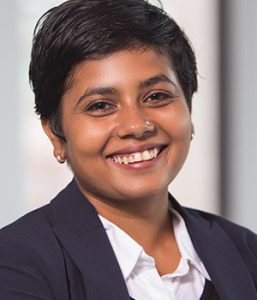 When she was a law student at India’s West Bengal National University of Juridical Sciences, Darshana Mitra explored many areas of the law. She took courses in economics, ecology, history, and public policy. It was volunteering with the Legal Aid Society—conducting workshops for domestic workers and performing street plays to promote domestic violence awareness—that set her on a definite career path. “This work sparked my interest in community-based lawyering,” she says.

Mitra also interned at the Alternative Law Forum (ALF), a lawyers’ collective that combines practice, research, advocacy, alternative dispute resolution, and educational programming. At ALF, she represented African students whose passports were illegally seized and helped them file complaints with the police, and she traveled across India to interview human rights lawyers to document their role in the history of her country.

While at ALF, Mitra also worked with other vulnerable populations, including sex workers. “Such communities live in a state of constant precarity, the impact of which is felt most on more vulnerable subgroups, such as women and sexual minorities,” she says. “What I have learned is that immigrants require constant vigilance, not from the police, but from civil society groups to ensure that their rights are not violated.”