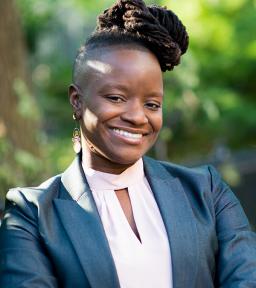 Chinyere Ezie is a Staff Attorney at the Center for Constitutional Rights, where she advocates for racial and gender justice; Lesbian, Gay, Bisexual, Transgender, Queer, and Intersex (LGBTQI) rights; and challenges governmental abuses of power.

Prior to joining The Center for Constitutional Rights, Chinyere was a Staff Attorney at the Southern Poverty Law Center, where she brought cases defending the rights of LGBTQI Southerners, including trans prisoners’ rights activist Ashley Diamond. She also served as a Trial Attorney at the U.S. Equal Employment Opportunity Commission where she litigated employment discrimination cases and secured a $5.1 million jury verdict on behalf of workers who were subjected to religious harassment.

Chinyere is a William J. Fulbright Scholar and a graduate of Yale University and Columbia Law School, where she was an Alexander Hamilton Scholar and served as Editor in Chief of the Journal of Gender and Law.

Chinyere is a frequent speaker at law conferences and social justice convenings across the country. Her advocacy has also been reported on by the New York Times, Washington Post, MSNBC, Al Jazeera, and NPR, among others.

In 2016, Chinyere was recognized as one of the nation’s Best LGBT Lawyers Under 40.