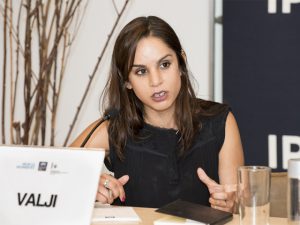 The Leitner Center was pleased to welcome Nahla Valji, Senior Gender Adviser in the UN Executive Office of the Secretary-General, as a speaker in the Leitner Human Rights Speaker Series. Ms. Valji examined global trends in gender inequality and focused on the United Nations’ own record of meeting gender parity goals in laying out Secretary-General Guterres’ Strategy. She discussed the critical role for temporary special measures to increase the meaningful representation and participation of women throughout the UN and in the UN’s humanitarian efforts and peace and security processes in particular. Ms. Valji’s talk also emphasized that prioritizing gender equality in post-conflict processes can also help to shift power dynamics and integrate historically marginalized perspectives, thereby strengthening peace agreements.

Nahla  Valji  is  the  Senior  Gender  Adviser  in  the  United  Nations’ 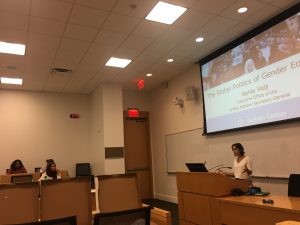 Executive  Office  of  the  Secretary-General  (EOSG). Her primary functions currently are to set up and oversee  the new UN-EU  Spotlight  Initiative  to  Eliminate  Violence  against  Women  and  Girls, a 500m Euro fund in support of the Sustainable Development Goals and gender equality;  as  well  as  the  Secretary-General’s  Gender  Parity  Strategy  among  other  efforts.  She  joined  the  Transition  Team  of  then  Secretary-General-designate  Guterres  in  November  2016.  Prior  to  this  she  was  the  Acting  Chief/  Deputy  Chief  of  the  Peace  and  Security  section  in  UN  Women’s  headquarters  in  New  York,  where  she  led  for  some  years  the  organization’s  work  on  peacekeeping,  peace  negotiations,  transitional  justice,  and  rule  of  law,  involving  both  global  programming  and  policy  work,  particularly  with  regards  to  the  Security  Council.  In  2015,  she  headed  the  Secretariat  for  the  Global  Study  on  implementation  of  resolution  1325,  a  comprehensive  study  requested  by  the  Security  Council  for  the  15-year  review  of  women,  peace  and  security.  She  founded  and  managed  the  International  Journal  of  Transitional  Justice  and  is  the  co-editor  of  the  Oxford  Handbook  on  Gender  and  Conflict (2018). 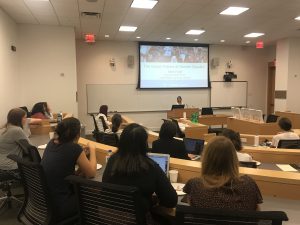 Prior  to  joining  the  UN,  Nahla  worked  in  South  Africa,  where  she  led  the  regional  transitional  justice  work  of  the  Centre  for  the  Study  of  Violence  and  Reconciliation  and  managed  the  African  Transitional  Justice  Research  Network.