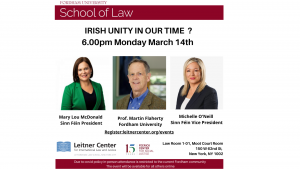 Only members of the Fordham community will be able to attend the in-person event. The event will be streamed live to the public.

Mary Lou is married to Martin and they have two young children, Iseult and Gerard. She is proud to represent the people of Dublin Central where she has a reputation for hard work and championing the needs of her constituency both locally and nationally.

Educated in Trinity College, Dublin, the University of Limerick, and Dublin City University she studied English Literature, European Integration Studies, and Human Resource Management. She previously worked as a consultant for the Irish Productivity Centre, a researcher for the Institute of European Affairs, and a trainer in the trade union-sponsored Partnership Unit of the Educational and Training Services Trust.

Michelle has also served as the Minister of Agriculture and Rural development and Minister of Health.

Currently leading in the polls, Michelle O’Neill could well become the First Minister in the North of Ireland Government following the planned election in May. The first non-unionist to hold the position since the formation of the state.